A Mini MAD Interview with Master of Parody, Tom Richmond!

A Mini MAD Interview with Master of Parody, Tom Richmond! 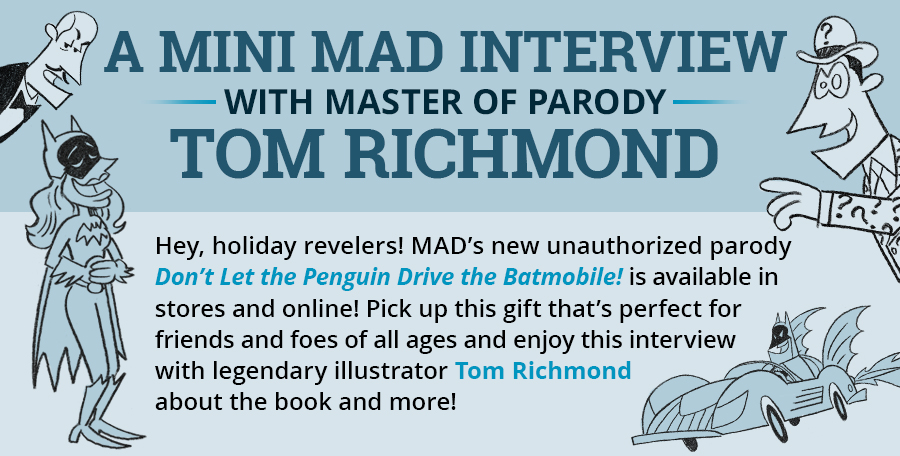 MAD: This is your third MAD children’s book parody. Is there another famous kids book you’d like to spoof?
Tom: Absolutely, a few actually… Maurice Sendak’s “Where the Wild Things Are?”, P.D. Eastman’s “Are you my Mother?” or anything by E.L. James.

MAD: All three books have a different style. Was it difficult to forget your own style and draw like someone else?
Tom: Actually, that is a bit of a challenge. You want to do something that is instantly recognizable as the art style of the book being parodied but brings in something new as well. Sometimes it is easier than other times. Mo Willem’s style didn't lend itself to the Batman universe too easily, but I had fun with it.

MAD: Which Batmobile is your favorite Batmobile? And WHY?!
Tom: That’s a tough one. I have a great affinity for the Barris ’66 Batmobile, but if I could only have one in the garage it would be the ’89 Burton Batmobile because that’s as badass as it comes.

MAD: When drawing the Penguin for this book, did you hear his voice in your head? What did he sound like?
Tom: Yes, I did. Oddly enough he sounded like that old guy who trained Rocky in the first movie… I’m not sure why.

MAD: Now that the holiday season is upon us, what are your thoughts on Batman’s smelliness, Robin’s ability to lay eggs, loss of Batmobile wheels, and whether The Joker is still large?
Tom: All I’ll say about that is if Batman had been driving the ’89 Batmobile, that song would never have been written. 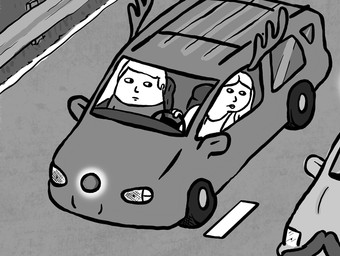