Joins “The Usual Gang of Idiots”

(BURBANK, CA – June 26, 2017) – MAD magazine, America’s foremost (and only) humor and satire publication, adds another well-known veteran of comics and entertainment to its editorial staff, today naming Bill Morrison as the magazine’s incoming Executive Editor. Longtime and current Executive Editor John Ficarra, along with other key members of the MAD team, will continue to publish the magazine from MAD’s New York offices through the year’s end, and will assist with the relocation of the magazine’s operation to DC Entertainment’s Burbank, CA, headquarters.

“The passion and hard work from our MAD colleagues in New York has been instrumental in preserving the enduring legacy of MAD magazine, and for that we are extremely grateful,” said Diane Nelson, President of DC Entertainment and President of Warner Bros. Consumer Products. “I’d especially like to thank John Ficarra and his team for the countless laughs and their unwavering commitment to the company, as well for remaining onboard during the transition of the MAD operations to the west coast. I have the utmost confidence that Bill, together with the editorial team in Burbank, will continue MAD’s legacy of humor and subversion as only MAD can.”

In his new role based in Burbank, Morrison will report to Hank Kanalz, SVP, Editorial Strategy & Administration and begin to take on the day-to-day operations of the magazine, hire and direct a MAD editorial and creative team for both MAD magazine and MAD books, as well as manage the development and implementation of the annual publishing schedule.

“We’re excited to have Bill on board as part of the MAD editorial family,” said Kanalz. “His pedigree as an editor, writer and artist make him the ideal person to lead the Usual Gang of Idiots out west. The bar has been set pretty high, but we have confidence that the team will find stools tall enough.”

Along with The Simpsons creator Matt Groening, Morrison co-founded Bongo Comics Group and was their creative director from 1993 to 2012. He drew the very first Simpsons comic book, SIMPSONS COMICS #1, which earned him his Eisner award and currently serves as president of the National Cartoonists Society.

"Joining up with the crew at MAD is thrilling, exciting and an incredible responsibility,” said Morrison. “I don’t know anyone who loves and respects MAD as much as I do. I’ll definitely have my work cut out for me, but I’m dedicated to upholding the high standards of absurd and irreverent humor that the public has come to expect from MAD. I’ve been asked if I will continue to include artist Al Jaffee in the magazine; as soon as I find out who he is, I’ll let everyone know.” 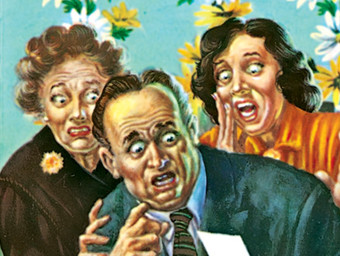 IN HONOR OF TRUMPCARE: A CLASSIC MAD PARODY