The MAD Staff Picks Their Favorite Back Covers: Art...

MAD has a long history of running a wide variety of material on our back covers: fake ads, magazine parodies, comics, and more. To wrap up 2012, each member of the MAD staff selected a favorite back cover and explained why this one stands out above hundreds of others. Come back tomorrow to see the last pick, and to read them all, click here!

Sam says: "The best use of MAD's back cover, for me, was as a vehicle for ad parodies, which were always so carefully put together that at first look they seemed to be the real thing. This back cover features a takeoff of the ads for Breck Shampoo which had been running for decades in magazines such as Ladies’ Home Journal and Harper's Bazaar. These ads featured pastel portraits of beautiful young women with silky long hair, rendered from 1936 to 1957 by Charles Sheldon and thereafter by the illustrator Ralph William Williams. (The campaign ended with Williams' death in 1976.) MAD's takeoff, with the headline, "Make Beautiful Hair BLECCH," portrayed — rather than a beautiful young woman with long, silky hair — a not-so-beautiful young man with long, silky hair (a novelty in 1964) — specifically, Ringo Starr, drummer for the Beatles. The portrait itself was painted with full Ralph William Williams lusciousness by infrequent MAD contributor Frank Frazetta. As an impressionable 11-year-old, I was fascinated by how a single image could be both beautiful and grotesque, precisely accurate and extravagantly exaggerated. It firmed up my ambition, already stoked by countless pages of Mort Drucker art, to pursue a career as a humorous illustrator." 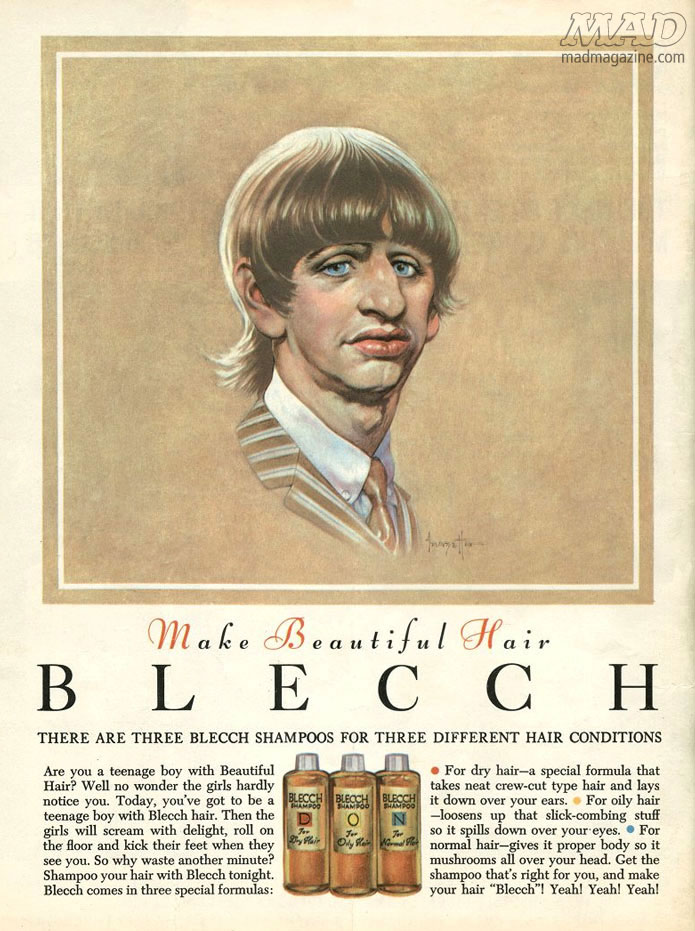