The MAD Staff Picks Their Favorite Back Covers: Associate...

MAD has a long history of running a wide variety of material on our back cover: fake ads, magazine parodies, comics, and more. To wrap up 2012, each member of the MAD staff selected a favorite back cover and explained why this one stands out above hundreds of others. Come back tomorrow to see another pick, and to read them all, click here!

Dave says: "For me, this back cover demonstrates just how smart MAD can be about its stupidity. In fact, even after 50 years, the cover still feels innovative, clever and daring. Unlike most back covers, it’s not a stand-alone, one-page gag. Instead, it’s part of a larger, ambitiously-dumb joke on the part of the editors. This issue was scheduled to appear on newsstands the day after the election — making it impossible for MAD to know the winner in time to get him on the cover.  So, MAD did the next best thing — they congratulated BOTH candidates! On the front cover was Nixon, while Kennedy was on the back cover (printed upside down so the magazine would appear to open properly!). News agents were sent a letter instructing them to display the cover with the winner on it — and the Usual Gang of Idiots would look like geniuses (for, I assume, the first and last time). I can’t imagine any young reader picking up this issue and not having their mind completely blown…twice. First, that MAD was able to predict the winner, then again when they realized how MAD had cheated in such a fantastic, smart-ass way." 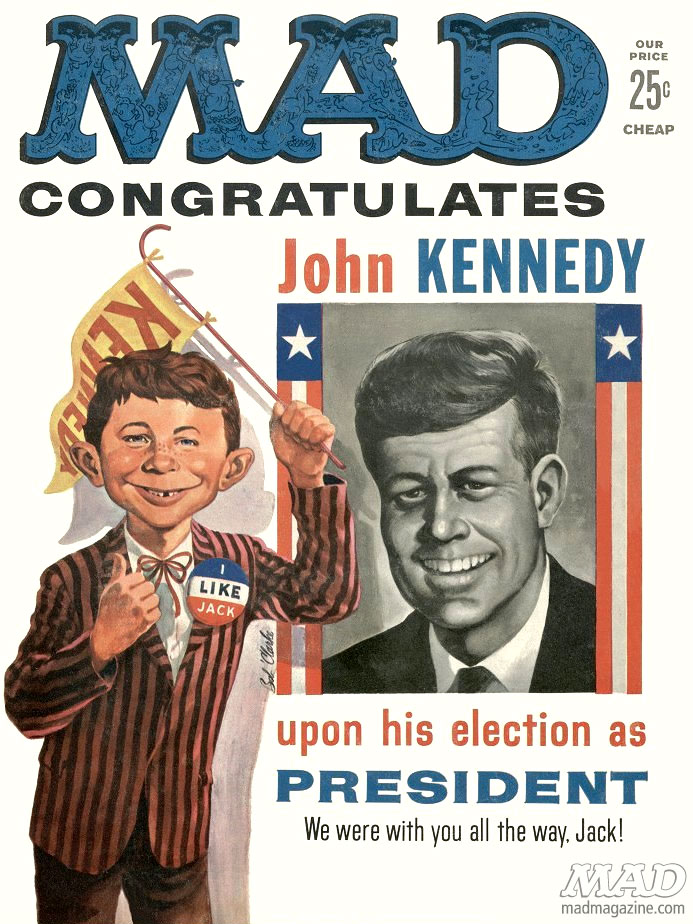