For the last few weeks, we've been posting excerpts from the essays Frank Jacobs wrote for our 60th Anniversary book, Totally Mad: 60 Years of Humor, Satire, Stupidity and Stupidity. We've already shared "Who Was Bill Gaines?", "Has MAD Ever Been Sued?" and "What Were the MAD Trips?" Today we delve into the early days of our moronic mascot, Alfred E. Neuman.

One day in the 1960s a letter was delivered to the MAD offices bearing no name or address. Other than a postage stamp, the envelope bore only a picture of the magazine’s cover boy, Alfred E. Neuman.

Clearly, the gap-toothed face of the idiot kid had become iconic. Alfred and MAD, to use an overworked phrase, were joined at the hip. Already the grinning face had shown up in unlikely places: placards of him as a candidate — “You could do worse, you always have!” — were flaunted at political conventions. His features were sculpted in ice at a Dartmouth Winter Carnival. Fred Astaire danced in an Alfred mask during a TV special. A party of climbers planted a Neuman flag atop Mount Everest.
Alfred owes his place in history to four men. The first was MAD’s first editor, Harvey Kurtzman, who glimpsed the grinning face, captioned “Me worry?” on a postcard in 1954. 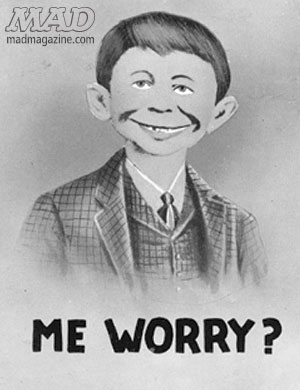 “It was a kid that didn’t have a care in the world, except mischief,” Kurtzman recalled. The boy soon made his way into the pages of the magazine, though he was as yet unnamed.

Kurtzman had been using the Neuman name mostly because it had the ring of a nonentity — although there was a Hollywood composer named Alfred Newman. Misspelled, with the added “E,” it too was integrated into the magazine.

When Al Feldstein replaced Kurtzman as editor, he decided to link “Alfred E. Neuman” with the face of the idiot kid. The idiot kid made his official debut in 1956 as a write-in candidate for President on the cover of MAD #30, and the magazine now had an official mascot and cover boy. In the next issue, Alfred made his second cover appearance pictured as an addition to Mount Rushmore.

Though others had their doubts, Nick Meglin, then an assistant editor, believed that MAD should continue to use Alfred as the magazine’s cover boy. “You’ll have to convince me,” said publisher Bill Gaines, who had veto power over all MAD covers. Playing up to Gaines’ interest in archaeology, Meglin submitted a rough sketch of Alfred in an Egyptian tomb (MAD #32) and one or two others that emerged as cover illustrations later. Having been convinced there were endless possibilities, Gaines agreed that Alfred should reign as the magazine’s icon.

The Neuman face was created by Norman Mingo. Curiously, none of MAD’s artists, though extremely versatile, has been able to render accurately the Mingo prototype. When Mingo died in 1980, his obituary in The New York Times identified him in its headline as the “Illustrator Behind ‘Alfred E. Neuman’ Face.” 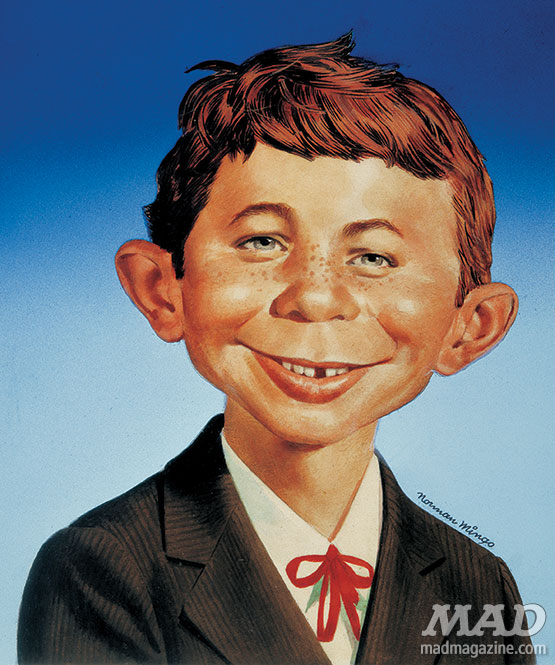 What is the source of the “What — Me Worry?” Boy? MAD asked its readers to help out and was deluged by suggestions and theories. The kid was used in 1915 to advertise a patent medicine; he was a newspaperman named Old Jack; he was taken from a biology textbook as an example of a person who lacked iodine; he was a testimonial on advertisements for painless dentistry; he was originated by comedian Garry Moore; he was a greeting-card alcoholic named Hooey McManus; he was a Siamese boy named Watmi Worri. One reader dug up a 1909 German calendar bearing a version of the inane smiling face.

By far the most pertinent correspondence came from a lawyer representing a Vermont woman named Helen Pratt Stuff. She claimed that her late husband, Harry Stuff, had created the kid in 1914, naming him “The Eternal Optimist.” Stuff’s copyrighted drawing, she charged, was the source of Alfred E. Neuman and she was taking MAD to court to prove it.

Thus began the great Alfred E. Neuman lawsuit. The stakes were not small. If MAD lost, it would be liable for millions of dollars in damages. And Alfred no longer would be permitted to show his worriless countenance in any MAD publication or property...

The Least-Funded Kickstarter Campaigns Ever (Vol. 2)