"Totally MAD" Excerpt: What Were the MAD Trips?

"Totally MAD" Excerpt: What Were the MAD Trips?

Each week for the rest of the year, we'll be posting excerpts from the essays Frank Jacobs wrote for our 60th Anniversary book, Totally Mad: 60 Years of Humor, Satire, Stupidity and Stupidity. We've already shared "Who Was Bill Gaines?" and "Has MAD Ever Been Sued?" Be sure to come back next week to read the (partial) answer to the question "Who is Alfred E. Neuman?"

By 1960, MAD had become an oddball national institution, and Bill Gaines wanted to keep it that way. His method was to create what came to be the MAD Family, made up of the editorial staff, steady contributors, even the magazine’s attorneys and accountant. The glue that held the group together was the annual MAD trip. Many of the writers and artists had never met. What better way for everyone to get to know their brethren than to fly them, all expenses paid, for a week or two in a foreign clime? These vacations, with their anticipations and memories, would knot the family ties even tighter. Especially if the trips were stag.

“I never met two wives who could get along with each other,” Gaines said at the time. “Bringing wives on the trips would divide the convivial MAD group into cliques. The wives would spend so much on clothing trying to outdo each other that it would cost the boys a fortune, and I can’t see any point to that.”

Two of the magazine’s mainstays, editor Al Feldstein and illustrator Mort Drucker, passed up the trips because of the all-male edict. The other MADmen accepted readily, eager to get a break from the typewriter and drawing-board. Skeptics might point out that Gaines, divorced at the time, was not burdened with the problem of leaving a wife at home. It would take 20 years before the stag rule was relaxed. 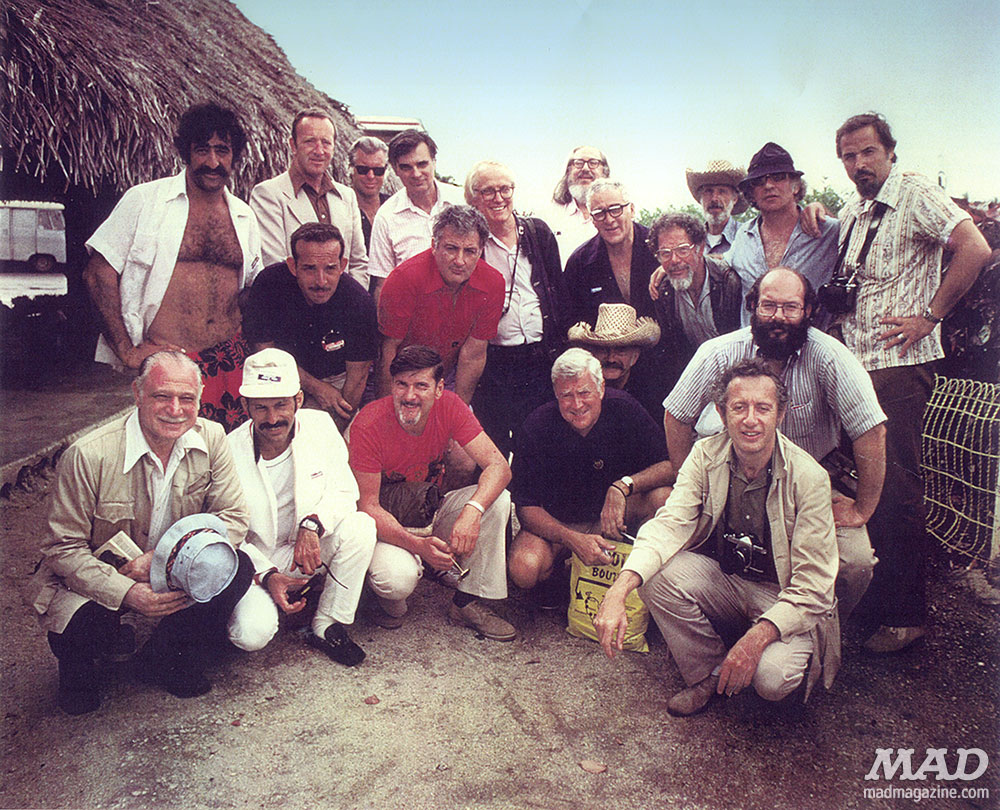 The first trip took the travelers to Haiti, one of Gaines’ favorite watering holes. The tone was set the first day. Discovering that the magazine had one subscriber in Port-au-Prince, Gaines piled his charges into five Jeeps, drove to the lad’s home, and presented him with a renewal card.

The next four trips were to the Caribbean, but Gaines was not happy. The West Indies bored him — especially Puerto Rico, where he spent most of his days reading and napping in his room or ordering a snack on the shaded terrace. Occasionally, in a neighborly gesture, he would tread cautiously across the beach to where the rest of the MADmen were sunning. After a few pleasantries, he would shuffle back to the hotel, relieved to be away from the sun and surf and the picture of grown men actually enjoying the stuff — sometimes, even, exercising in it.

There were better places to go with better things to see and better food to eat, and in the fall of 1966 Gaines loosened his belt and took the group to Paris, and then to Surinam, Italy, Kenya, Athens, Japan, London, Copenhagen, and the Soviet Union — to every continent save Australia and Antarctica, 27 trips in all.

The tone was set early on. In Florence, the vacationers were grouped on the steps of the Duomo Cathedral when a shouting parade of striking local laborers stampeded by. In the middle of the marchers, carrying an appropriated picket sign with his clenched fist raised high, was Sergio Aragonés.

In Venice, Nick Meglin scrutinized his admission ticket to the Palace of the Doges. “What does it say?” he was asked. “It says,” answered Meglin, “you may have already won this palace.” At the Vatican, Dick DeBartolo looked at the opulence and remarked, “God isn’t dead. He just can’t afford the rent.”

In Moscow, Gaines was continually stared at by the local populace. At first it was thought that this was because of his beard and massive mop of hair. It was later learned, however, that to Muscovite eyes, at least, Gaines resembled Karl Marx. The abundance of beards in the travelers prompted one observer to remark that the MAD gang looked like a road company of Benjamin Harrison’s cabinet.

Gaines himself climbed — yes, climbed — to the top of the Leaning Tower of Pisa and there placed an “Alfred E. Neuman for President” poster. It was rumored, but not confirmed, that the tower leaned an inch or two more after that.