"Totally MAD" Excerpt: Who Was Bill Gaines? Part One

Each week for the rest of the year, we'll be posting excerpts from the essays Frank Jacobs wrote for our 60th Anniversary book, Totally Mad: 60 Years of Humor, Satire, Stupidity and Stupidity. Leading off is a piece about the man who started it all, MAD founder William M. Gaines. Be sure to come back next week to read the (partial) answer to the question "Has MAD Ever Been Sued?"

With the untimely death of his father, Bill Gaines seemed unprepared to become the head of Educational Comics, often abbreviated as EC. He was naïve and inexperienced, but even he could see that the company, then $100,000 in the red, was in deep trouble. Its kiddie comics — “Bouncy Bunny in the Friendly Forest” was  a typical title — had seen their day.

Gaines experimented, tapped his creative side, and a new breed of comic book emerged. Its name was horror. Gaines and writer/editor Al Feldstein hit the jackpot and begot an empire that would spawn the most fanatical cult in the history of the industry. EC now stood for Entertaining Comics, and with the changeover a new Bill Gaines gradually emerged: an efficient, determined, honest-to-goodness publisher and businessman.

A few years later, with the enormous success of MAD, the transformation was complete. Gaines became the prototype of a leader — unshaven, unkempt, and sometimes off the rails — but a leader nonetheless, and a father figure to many.

Longtime MAD art director John Putnam agreed. “He can  be a warm friend and yet keeps a workable distance between himself and his employees. I’m never made to feel like an employee, but I’m not going to walk all over him — no one is.”

The door to Gaines’ office was almost always open and unless he was counting money or double-checking items on his daily calendar, he was available to anyone. He loved gossip and listened avidly to any tidbit, but almost never contributed a view of his own.

“Bill will listen and Bill will laugh,” said Putnam, “but that’s all. I’ve never heard him put anyone on the staff down.”

Gaines’ office was a museum of sentimental and macabre memorabilia. The first thing you saw was the gigantic presence of King Kong peering in a window. The papier-mâché,  fur-covered gorilla was handcrafted by artist Sergio Aragonés and presented to Gaines as a Christmas gift from his staff and contributors. Hanging from the ceiling were zeppelins of various sizes — all gifts from MADmen — and the outlandish MAD Zeppelin, co-created by artist George Woodbridge and art director John Putnam and later included as a bonus cut-out in  a MAD Special. 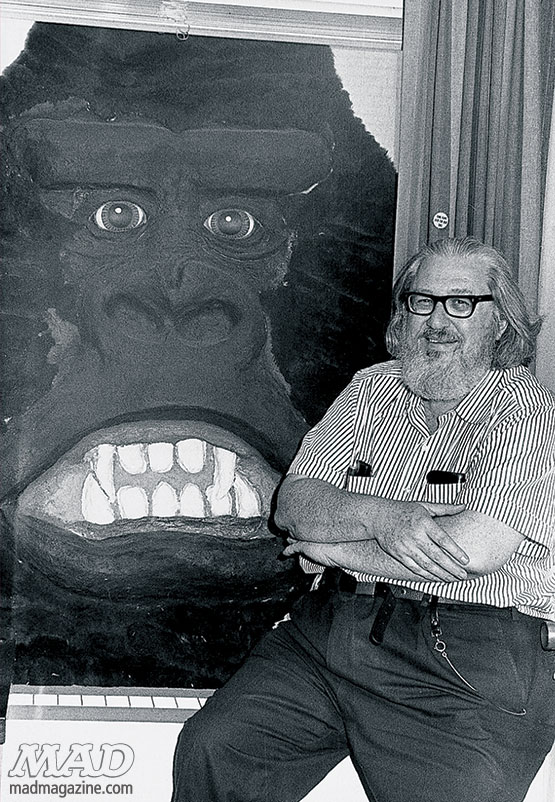 On a cabinet sat an old peep-show nickelodeon — also a Christmas gift — in which one could view a flip-card film, interposed with photos of the MAD crew, each greeting Gaines with an obscene gesture. Nearby rested another gift, an ancient cash register that belonged to then-associate editor Nick Meglin’s grandfather. Each key bore a peculiar face or phrase. Push down the key picturing then-assistant art director Lenny Brenner, and at the top a metal tab popped up, asking, “Whaddya want, ya  fat bastard?” Push down a picture of omnipresent mascot  Alfred E. Neuman, and up would pop “No Sale.”
“Gaines was a very responsive person, and he inspired you to bigger and better gags,” recalls Meglin. “You found yourself doing most anything to hear him laugh.” Said Putnam, “There is no more musical sound in the world than Bill Gaines laughing.”
Facing Gaines’ desk was a glass-door cabinet, in which rested the dual-framed photographs of a man and a woman. Some visitors believed they were portraits of his parents, a supposition that Gaines often allowed to go uncorrected. In truth, they were photos of silent-screen star Fatty Arbuckle and starlet Virginia Rappe, whom Arbuckle was accused of molesting at a Hollywood orgy. “I thought it would be a nice gesture to link them forever,” Gaines said.
On a door was a plaque with an inscription which used to adorn the walls of geisha houses: 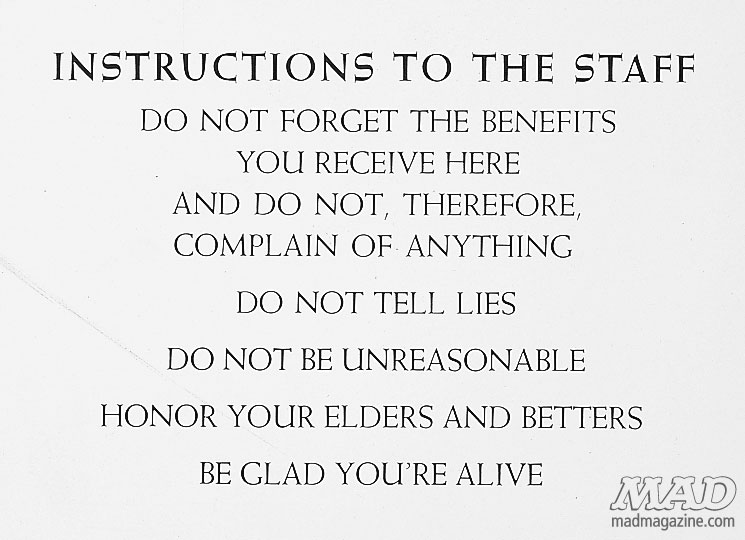 Gaines checked his desk many times a day to make sure every item was in its proper place. Dwarfing everything was a circular rack on which hung 30 rubber stamps, nearly all of which he used regularly. Many bore the names and addresses of people he corresponded with often, thus saving him the time of inscribing outgoing mail by hand. He admitted that he needed more than 30 rubber stamps, but being a creature of habit, he made do with what he had. 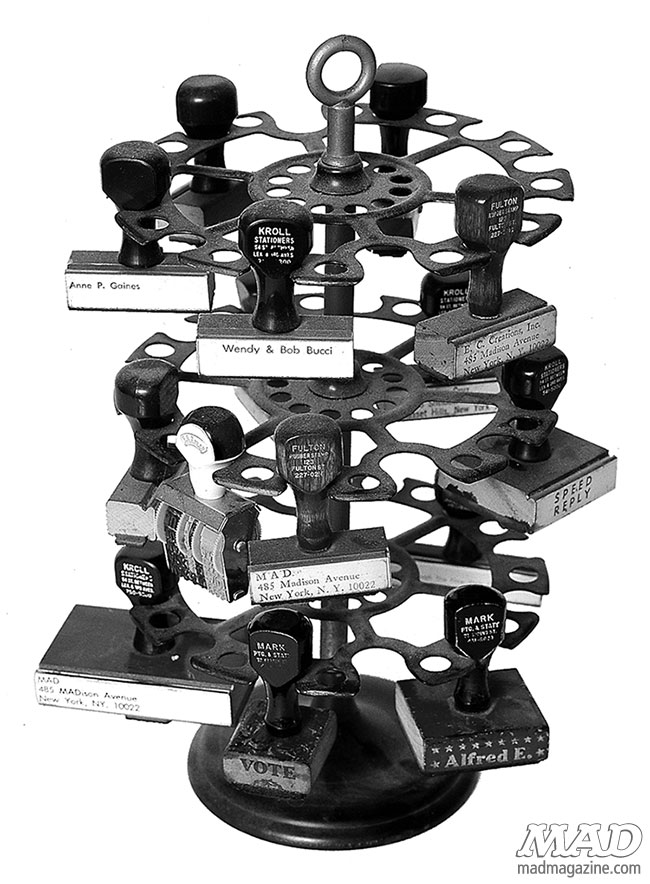 Gaines’ most cherished possession was his calendar on which, in a script only he could decipher, he notated his missions for the day. As each task was completed, he blackened out the mission with savage satisfaction. It was vital, important, even sacred for him to get every item crossed out.

Contrary to the size of his person, appetite, and bankroll, Gaines thought small—at least as publisher of MAD. Playboy’s Hugh Hefner once asked him what new projects he was planning.

“It was like I was guilty of blasphemy,” Gaines said later.

What one must realize is that Gaines was terrified of getting involved in an operation too big for him to handle personally. Therein lieth ruin — not for Hefner, perhaps, but assuredly for himself. He didn’t seek to build an empire; MAD would provide him with a modest, quite profitable kingdom.

MAD Asks: Ever Read the Back of Your Powerball Ticket?