Should MAD start a "Point/Counterpoint" feature? 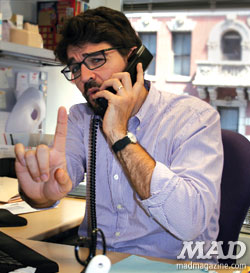 NO.
By Dave Croatto, Associate Editor

To set out to argue is a rejection of friendship. It’s looking at an extended hand and slapping it away. And that’s all point/counterpoint is — someone saying something and someone else saying, “You are wrong and I’m determined to make you look stupid.” To which I say, “Count me out!” I would never participate in such a banal, hurtful dialogue.

What kind of monster would embrace something that by definition is contrary, antagonistic, mean-spirited and ugly? (I won’t mention any names here, but it’s contained in the sentence “Joe Raiola is a despicable douche-nugget.”) 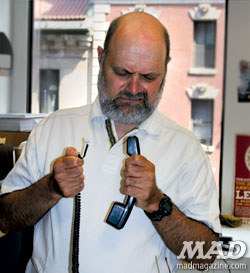 Are you kidding me, Dave? You’re wrong and I’m determined to make you look stupid! The more relevant question is why haven’t we already started a point-counterpoint feature?

Is the MAD blog the premiere go-to-place on the web for meaningless idiocy or not? If it is, then we need to feature passionately heated arguments about extremely unimportant subjects. In fact, I’d argue that the subject we’re debating now isn’t trivial enough. Our readers would rather us clash over dust, lint or politics. Blah blah blah.

I say this and my opponent says that. But please remember, that my opponent (in this case, Dave Croatto — I will mention names) is an ignoramus of the highest magnitude, unfit to scrub the tub in which I have bathed. Whereas my opinions are brilliantly well-reasoned, his opinions have less worth than a cup of chicken feces. Now we’re getting somewhere.

We do an unforgivable disservice to our loyal fans by not providing them with this kind thoughtless, repetitive and ultimately meaningless dialogue. To suggest otherwise serves no purpose, though on second thought, if no one were “suggesting otherwise” this wouldn’t be much of a point/counterpoint, would it?

Thank you for agreeing with me.

Other Royal Family Members in the Buff