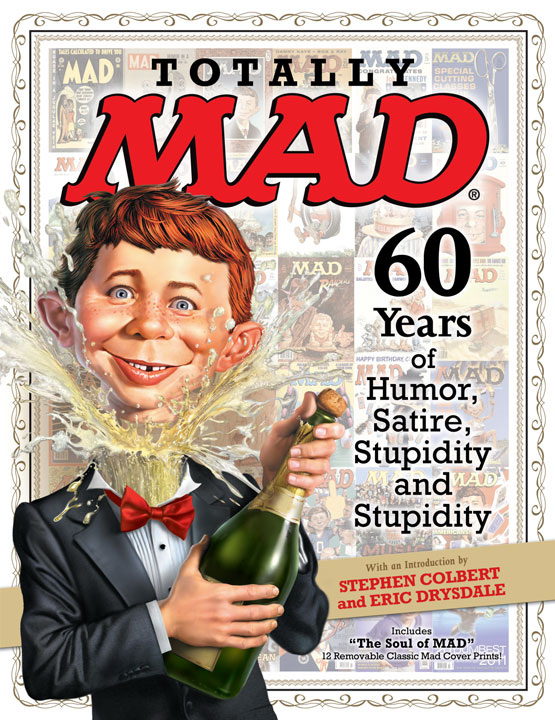 On Sale October 30 at Retailers Nationwide

Totally MAD to Premiere at Comic-Con on July 14

New York, NY, July 10, 2012 – To celebrate MAD Magazine’s 60th anniversary, Time Home Entertainment Inc. is foolishly teaming up with MAD Magazine on Totally MAD, a new collection of the legendary humor magazine’s high-quality idiocy that is so widely un-anticipated, this overblown press release is needed to call attention to it.

Totally MAD (Time Home Entertainment Inc.; $34.95) goes on sale on October 30, 2012 and will be available at retailers nationwide. (The date when booksellers start slapping that giant “75% Off” sticker on the front cover obscuring the book’s title has not yet been determined.)

Organized by decade, this oversized 256-page book features some of the world’s best comedy writers, cartoonists and humorous illustrators – “The Usual Gang of Idiots” – as they have long called themselves. In addition, the book includes numbered pages for maximum reader convenience.

As a bonus, the book features a removable set of 12 classic front covers, dubbed “The Soul of MAD” by MAD Founder and Publisher William M. Gaines. Each print was selected for its uniqueness, artistic achievement and classic timelessness, and is suitable for framing or wrapping fish.

Totally MAD includes such favorites as:

Totally MAD is the perfect gift, not just for MAD fans, but for anyone interested in pop culture, comedy, music, politics, entertainment, sports or history. In other words, absolutely everyone should buy this book. No exceptions will be tolerated!

MAD at Comic-Con: Saturday, July 14
John Ficarra and “The Usual Gang of Idiots” will host a MAD panel at Comic-Con International in San Diego on Saturday, July 14 (Room 9, 2-3 PM). Panelists will include MAD art directors Sam Viviano and Ryan Flanders, MAD movie and TV satire artists Tom Richmond and Angelo Torres, “Spy vs. Spy” artist/writer Peter Kuper and the legendary MAD cartoonist Sergio Aragonés. Fans can find out what’s happening with America’s most famous humor magazine and get a preview of the never-before-seen pages of the upcoming book Totally MAD. There will also be an audience Q&A, with prizes for the best questions. Media is invited to attend.

About MAD Magazine:
Celebrating its 60th anniversary this year, MAD Magazine is America’s longest-running humor publication with that title. MAD has entertained, inspired and occasionally revolted generations of readers by satirizing politicians, celebrities, sports and pop culture. Whether in print, on television, the web or the iPad, MAD remains a cultural touchstone. MAD Magazine is part of DC Entertainment, a Warner Bros. Entertainment Company, though they frequently deny it.